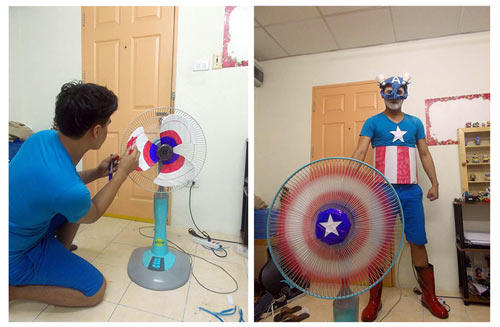 The second episode of the superhero movie “The Avengers, Age Of Ultron” is coming soon. You may like the heroes as Hulk, Arrow, Iron Man, Wasp, Thor or Captain America and you’d like to cosplay as one of them. The problem to cosplay is often the money but what about making your own Captain America from scratch? We propose you to create a low cost costume of Captain America with almost nothing except the things that you already have at home

All you need is a good sense of humor and a bit of imagination. I won’t lie but you can guess that a costume made from scratch won’t be the exact copy of favorite comic book character, but who cares as long as we can recognize the super hero ?

Today we are going to focus on Captain America only, as you have seen the picture illustrating this article: we are going to create the cheap version of Captain America. Do you see the happiness in the eyes of that guy wearing his homemade costume. This man is a specialist of DIY cosplay and he is doing really incredible costumes with almost nothing.

The master piece of this Captain America costume is the shield of the hero. This guy got the insane idea to create Captain America’s shield with a fan. To do like him just grab a brush or a marker and paint the blades of the fan, start from the edge and paint one third of each blade in red, then another third of the blades in white and finish with the last third with two stripes of red and blue. Cover back the fan with its grid and add a white star in a blue circle background. You can make this star with your computer and print it or you can trim stickers. Once these operations are done turn on the fan, congratulations you just get a cool Captain America’s shield.

Now let’s make the costume of Captain America. As you noticed Captain America’s costume main color is blue, go to your wardrobe and try to get blue pants and blue T-shirt, once you’ve found them put them on. Captain America has on his costume the stomach part coverved with white and red vertical stripes. To make this our friend just wrapped his stomach with a white paper on which he has drawn red stripes. A pair of red boots will be needed as well for the bottom part of the costume. If infortunatly you don’t have any red boots you can wrap your feets until your calf.

The costume is now almost completed but an important part is missing, the head. A Captain America without mask won’t be Captain America. To make your mask easily as our fake hero did, go to your drawer and grab a blue speedo or underpants. Cover you head with the underwear and put the holes where your legs are supposed to be, in front of your eyes. The final touch of your helmet will be the white A and the wings, you can make the little wings with two badminton birdies.

The final result is quite awesome, if you don’t like it maybe you are experiencing a lack of humor !

Sometimes when you cosplay you will maybe need another way to achieve a complete transformation. To do this we propose to you to wear cool Korean contact lenses to change the color or the pattern of your iris. Buy your color lenses at Solution-Lens.com for less than $20 a pair and enjoy our BUY 2 GET 1 MORE FREE offer.