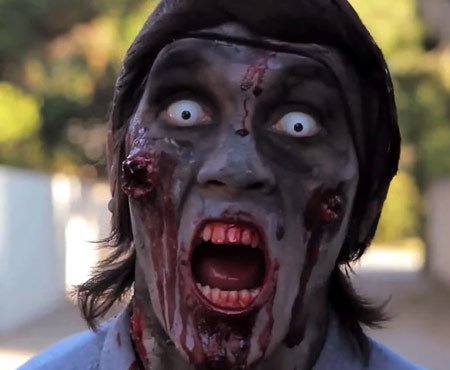 Zombie character also called walking dead or living dead is the most popular character for Halloween. No doubt that Michael Jackson and his video clip “Thriller” contributed to increase zombie popularity and sympathy to the mass.

The big advantage of zombie costume is that you don’t have to rent a costume or properly make one. You can wear your usual clothes, or dress the way you want, it can be funnier with working uniform as for example nurse, cop, doctor, fireman…

Of course don’t use brand new clothes but use those that you planned to give or throw away. You will have to sacrifice your clothes because they are going to covered of blood and holes.

To look like a real zombie, you’ll need to use a several amount of makeup. First you need to get a pale complexion, to look like dead people, we have to feel that you come back from the kingdom of the death. Be generous with fake bleeding scars and don’t forget to darken your eyelids and the bags under your eyes.

Maybe you have chosen to look like a zombie thanks to the video games “Resident Evil”, “House Of The Dead”, “Call Of Duty”, ”Dead Rising” or “Half-Life”, but it’s also possible that you have been influenced by movies like “World War Z”, “Warm Bodies”, “Army Of The Dead”, “Shaun Of The Dead” or the series “The Walking Dead”. Whatever is your inspiration you will be amazing with you new zombie look.

To complete your costume and have a perfect zombie set, you’ll have to customize your costume and makeup with a nice pair of cosplay circle lenses. Check our website and our special cosplay animation catalogue also called crazy lenses catalogue. 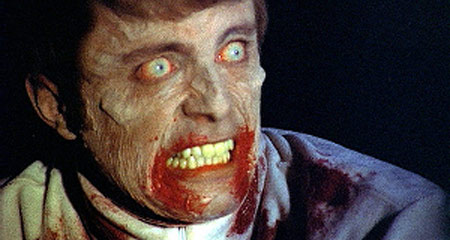 Prefer a white scary pair of circle lenses which will freak out people who look at you, we propose you to choose between “Geo CP-F1” and “Geo SF-16”, Marilyn Manson’s favorite circle lenses.

Black circle lenses are quite freaky too, and they are totally required for Halloween.

We recommend you to try the black opaque ‘Geo CP-F7’ if you have light eyes or the transparent Geo Black WCK-113 if you eyes are already dark.

Other products frequently chosen by our customers to have a zombie look are the red circle lenses.

These color lenses give a nice bloodshot eyes effect and they can also help people to believe that you are possessed or infected by a terrible disease or virus that made you become a cannibal and a fierce creature.

Thanks to Solution-Lens.com you are going to blow people’s mind during this Halloween celebration, so enjoy your Halloween party.