Girls who are following trends know well that Korean women are champions in trendy stuffs. If we always envy their pathbreaking cosmetics , we are puzzled by their addiction to plastic surgery. A study from 2014 has shown that on 1000 Korean citizens, 16 has used plastic surgery. For example without people noticing, the addiction to the Korean people to the “V” shape jaw starts spreading in Europe and USA as a trend.

We are not really surprise that Korean girls yield to this new trend that is really weird for western people. As the blog Refinery29 reviewed, korean girls are many to try pubic-hair transplants. Korean Association of Medical Journal Editors reports that 10% of the feminine Korean population is suffering of “pubic atricosis or hypotrichosis”, which is an insufficient amount of hairs on the pubic that makes these women suffering psychologically.

A study made by a Seoul plastic plastic surgery clinic shows that the patient of this surgery were 74% to choose it because they were feeling inferior to other women. More figures now from the Internatonal Society of Hair Restoration Surgery report that in 2010 and 2012 the demand for this kind of plsatic surgery increased of 160%.

A Korean advertising for pubic-hair transplants 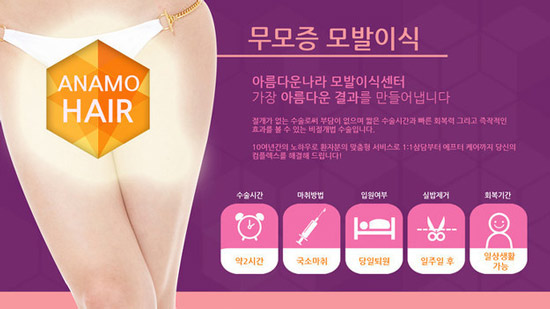 If Asian people fancies sometimes make us smile, this last trend could be a real trend in western counties. Total hair removal has been adopted by western ladies for decades, but today the trend to look natural starts emerging. At the beginning of this year, the sexy actress Cameron Diaz gave an advice in her book (The Body Book) as a wise person : “Ladies, leave your vagina fully dressed”. Months after, we have discovered that Kate Moss had followed the advice and Madonna introduced to the world her hairy armpits on Instagram. Recently the brand American Apparel smelt a good way to promote and display in its New York store mannequins with bushy pubic hair, this brand is always fighting against beauty standards. 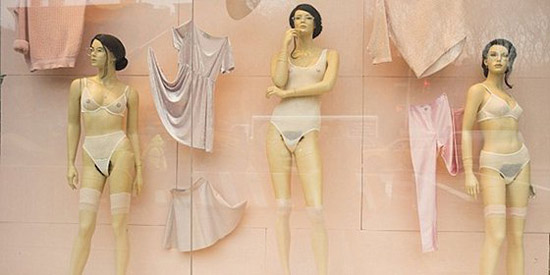 Good news if you are victim of wax, the idea that hairy pubic is dirty or repulsive convinces less and less people. What if this new aesthetic norm would be more hygienic ?

In 2012, the leader of the Western University of the United States research center said that micro-injuries can occur during hair removal. She said: “If pubic-hair is there, this is for a reason, it protects against friction which can cause injuries and cuts. Pubic-hair is a natural protection against bacteria “. She also added that the bacteria we are taking about are Staphylococcus aureus and B Streptococcus which could be lethal if not treated in time. In America a recent study demonstrated last year that a full hair removal can facilitate virus like molluscum contagiosum to appear. This virus can produce red pimples that can become little wounds if they are not treated.

For the ladies ready to imitate Korean girls, strat saving money right now, because in Korea, pubic-hair implants cost around $2000 and can’t be done always in one shot.